Following on the tails of the post about Ginkgo Beijing, yours truly is sticking with the theme of schizophrenic establishments in the Andingmen/jiaodaokou area. 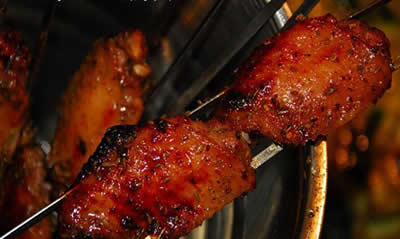 nice and crispy.. the way nature intended them to be

Chicken wings are all the rage in Beijing! The city’s infatuation with wings goes back a few years now and can almost be traced back to the days of a long gone place called “cox” and it’s neighbor, the original “saddle”. Since then, we’ve witnessed a wing battle amongst the foreign joints with the Rickshaw and Luga’s amongst the contenders! Chinese establishments are not being left behind, far from it!!! There are joints everywhere in the city led by Wu Ge conjures images of the soup nazi with Asian characteristics! My personal favorite though is Hot Bean Cooperative (炒豆合作社)! The story of the place is quite well documented elsewhere on the web as a joint project between a couple of friends in art school that are doing it “just to have fun” and that’s what eating there is like: It’s fun!

A fellow foodie who has now departed Beijing introduced me to this little gem about 1 year ago. We were coming out of a gigantic wine tasting and needed food fast and so we went there. Since then, I’ve gone back a few times and enjoyed myself each time including with a group of 15+ for a friday dinner. The place is slightly hard to find, tucked in chaodou hutong linking jiaodaokou and nanluoguxiang but it’s usually busy most nights of the week to the point where if you go in with party, you’d better give’em a call and make a reservation! Yes, you read it right! you gotta make a reservation just to go and eat chicken wings while sitting on a plastic chair in a cement room covered in graffiti.

besides the good food, Hot Bean also boosts one of the most bizarrely eclectic interiors in Beijing. It starts from the red hallway one must walk through in order to get inside the eatery. At the end of said hallway stands one giant tree that has been part of it forever. Once you’re done looking at the tree, you’ll notice a few rooms lining up the yard: the yellow one, the red one and the cemented one. Take some time to walk through each and notice the mix of photos and drawings on the wall. All smiling faces, all about having fun!
furniture is randomly placed around and consists of plastic tables, stools, some wooden chairs etc… it the corner chuan’r stand but indoors.

It’s quirky, tacky, funny, sexy, eclectic and bizarre all at once!

What about the food then? Some of the best wings this side of Texas and I’m not exaggerating! The rest of the menu ain’t bad either:

wings come in a bunch of flavors (~4 to 10RMB), my favorites being “korean Orange” and “spicy”. It could be argued that the spicy ones are a case of ” Do you want some wings with those chilies?” but they are nevertheless great. There also have beef chuan’r, shrimps, tendons, chicken hearts amongst others.
The mashed potatoes ( ~8RMB) are something to write home about and so is the papaya salad (~15RMB). Another standout item is the potato salad… now that how my mamma used to make it!!!! They also offer a variety of other western and chinese dishes that I haven’t gotten around to trying but heard good things about from fellow diners.

want some wings with those chilies???

Another cool thing about the place is the old fashioned glass mini-coke bottles!! Those puppies are heavenly when served chilled on a hot summer night! Last but not least, they also have no qualms about you bringing in your own wine.. no worries about beer, they got plenty of it and it’s cheap. 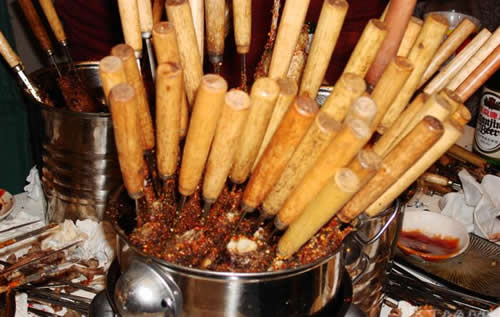 So, get out of that comfort zone, go have a nice meal at Hot Beans Cooperative and then maybe follow it up by a cool little evening at Gingko Beijing to finish your andingmen/jiaodaokou outing.