Flashback to about 4 years ago, i was visiting Beijing from a nearby town! Those were the days my friends, when Sanlitun south stood proud and the North was home to more neons that you could shake a rave at. I was walking on the back streets towards close to Aperetivo when this kid walked up to me and asked: “Tu as du feu?’ (“got a light” in French). I pulled out my lighter, lit his cigarette and asked him why he spoke to me in French to which he replied that everybody “speaks French around here”.
I moved on my merry way and never really thought about it again.
Fast forward to 2009! I had a friend that came over to China to study Chinese. The one thing she kept repeating over the course of the 6 months she spent in Beijing was that it would be more practical for her to learn French here than Chinese because she somehow always ended up in a French speaking crowd knowing that she tried sometimes going out of her way to avoid that.

So in honor of Bastille Day, I figured i should try and sum up some of the French influences in my Beijing life (hey.. see the header about “biased perspective”)

Gee.. that’s a lot of French around here!

That said, I’m slightly surprised that Bastille day is so low key this year. A little scanning of today’s events on both CityWeekend and TheBeijinger returned only 1 result referring to this day and that was understandably enough from Maison Boulud, a French themed restaurant. In comparison, the 4th of July was huge in the city with celebrations everywhere!
I am not sure what that says about Beijing, the French or French-owned establishments but the silence is strange. I’m sure that there will still be blue/red/white gatherings with baguettes and wine all around town but i’m curious as to why it’s all so low key. And no, I don’t think that last year’s events have anything to do with it.
In anycase, today is a good day to smile about France, gather a few friends, get a baguette, some wine and camembert along with some nice fake mustaches and a pack or two of Gauloises! Allez les sans-culottes!! 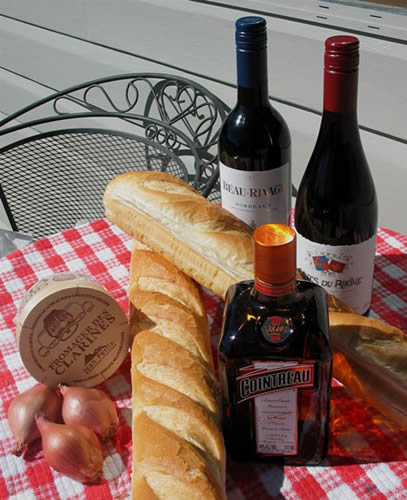