Gia Wang 王悦 doesn’t need introductions as far as the Beijing live scene goes. She was a driving squealing voice behind Hang On The Box, China’s premier girl punk band and their offspring Girl Kill Girl.
I remember seeing HOTB years ago and being captivated by their live raw energy as well as their musical innocence (whether the girls themselves were innocent of not is a whole other story) so I was looking forward to this latest offspring off of the HOTB tree even though it was Gia on her little lonesome.
How would the transition from punk to pop/bossanova go and how will the fans react?

I managed to miss her debut at Mao but caught her last week for her birthday gala at Yugong Yishan. It was billed as a nice double whammy of Gia with her solo effort as well as Girl Kill Girl. Ding Ke was on opening duty! 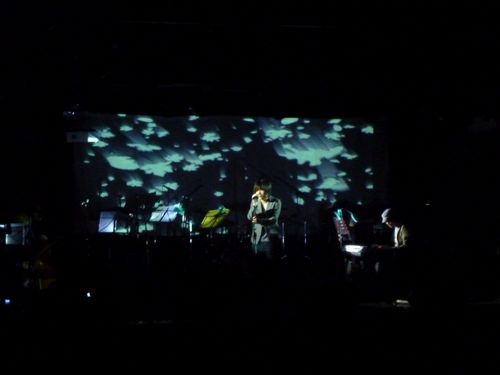 I made in on time to catch 2 songs by Ding Ke and the best i can say is that it was not my cup of tea. The music was quite mellow, with shadows and keyboard sounds floating around the place. Dreamy is how i would describe the whole thing, it also applies to Ding Ke’s voice.

Then it was time for the Gia Show.. May I say that she aged well? The punk girl is now a lady and no one can take that from her!

She kicked off the festivities with a couple of Girl Kill Girl songs which were a decent attempt at melodic punk if there is such a thing but nevertheless enjoyable. It lacked the stamina and power of HOTB but then again, it’s not fair to compare the two. One surprise was GKG songs were more instrumental than i expected, almost a punk jam of sort! Audience was definitely into it, moving along to the riffs.

Gia then mentioned that she would be doing her own Bossanova songs after that and got going on that. Now, I’m no expert but I’ve heard Bossanova before and I can say that the first few songs she played was not it. And worse, the audience was not buying it!
Gia soldiered on through her set like the professional she was and got better with each song, my personal favorite being her cover of “The Girl from Ipanema”. The last 3 or 4 songs of the show were quite a bit truer to the style she intended to have and sounded pretty darn good. (see below)

At the end of the show though, on her birthday, the diva stood alone! Her audience walked out long before the last note floated through the smoky confines of Yugong Yishan and she saw it. A “Happy Birthday” from one of the few fans left was not even returned as she walked of stage, visibly disappointed in the turn of events.

Don’t get me wrong, I gotta give Caesar what belongs to Caesar! Gia has an amazing voice that lends itself to mellow jazzier type of songs and one could hear that but I would not call it Bossanova! I would however still go and listen to it/her knowing what to expect.. that said, I won’t go out of my way for it.
Big props to her for having the cojones to switch styles like that and do something she visibly feels passionate about.. shame that on her birthday, the so-called-fans seemed to turn their backs on the Diva.