A friend of mine spoke to me earlier in the week of the Mao Award show and was surprised at the look of surprise on my face.. I had no idea it was happening! Heck, even now that the show has taken place, it seems like there is little to be found online about it. Anyways, I did manage to confirm it was happening after calling the venue and getting an affirmative response from management.

The advertised lineup was definitely worth a trip to Gulou considering we had Misandao, hanggai and Nanwu amongst others. 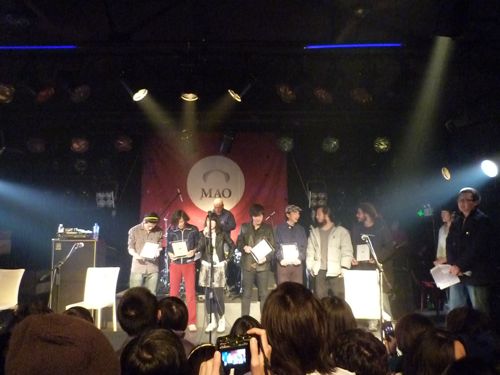 a refreshing diversity of winners

I made it there a little past 10, just in time for one of the awards to be delivered. My limited Chinese got in the way of understanding everything that was taking place but the skinny of it all was that The Subs, Hanggai and Buyi amongst others received awards for outstanding live performances at Mao Live house in 2009. (or so it looked) 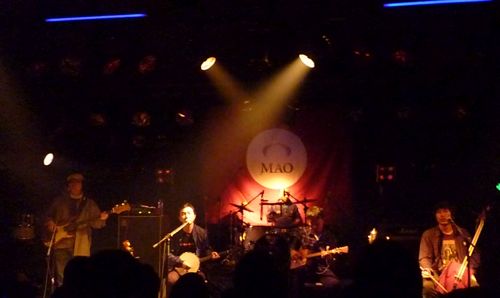 Hanggai was next up on stage in civilian clothing for a decent 40mn show of their classic songs including a crowd rousing reedition of their Drinking Song. I really love the whole Mongolian throat singing concept and have to try and go check out some of the other bands that do that around Beijing. 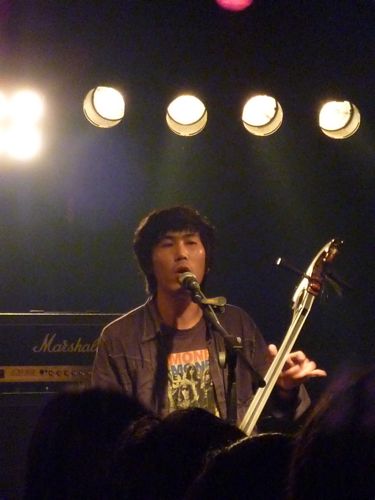 The throat behind the band

These guys put on an amazing show every time i see them and have to be commended for that. That said, i do take issue still to their own shows and how long of a set they play but that’s another story.

We also had another round of awards where the record labels and then the promotion companies were recognized. Split was mentioned amongst others and were notably absent as their representatives were tending to Andrew Bird who was playing Yugong Yishan at the time. What was notable about this segment was Modern Sky representative confirming that the Strawberry Festival would definitely be taking place May 1-3 which is great news.

next up was a performance by someone i did not know for a single cover of Coldplay. Then came the revelation of the night: Nanwu

I had seen Nanwu http://www.myspace.cn/nanwu before at the Folk Festival last summer and was less than impressed but let me tell you folks, these cats have come a long way. disciplined and fun: quirky and lengthy songs with plenty of curveballs that leave the audience at a loss as whether to jump, dance or mosh!

The band played a 40mn set as well with an encore and displayed amazing showmanship and proficiency! They played what I would call Rock with Chinese characteristics. Their lead singer made sure the crowd reacted to the band and kept the audience engaged throughout. The band plays a great mix of hard rock, blues, folk with accompaniment of flutes and keyboards ( i had visions of Jethru Tull at some point). These cats were good and I’ll go out of my way to catch them again whenever i can.

Misandao http://www.myspace.com/misandaooi (the punk band whose lead singer i wouldn’t want to run into in a dark alley) played a set before i got there and had a positive crowd response according to a friend that was there earlier.

So that’s the award show in a nutshell, my ramblings and thoughts will follow shortly!