When I wrote last week that April was a relentless month music-wise, I wasn’t kidding folks! Hot on the heels of Jue Festival, Ephemeral kicks off. Other genres of music reappear after being MIA for a week or so. Let’s see what’s cooking: 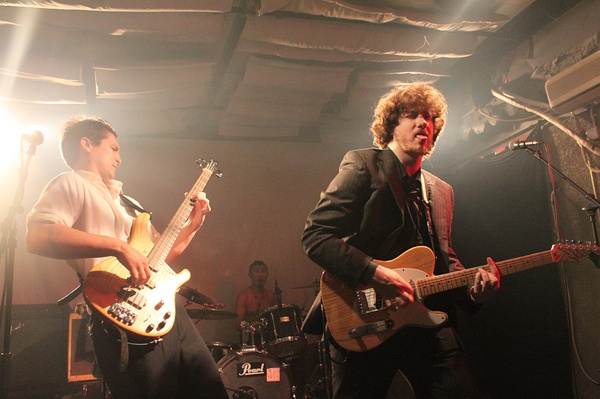 Ephemeral day1 @ Yugong Yishan:
A celebration of international experimental folks with Xiao He, Thee, Stranded Horse Folk & Joseph Arthur. France, China and USAnia combine for what “could” be one hell of a treat! Folk folks, I know where you’re gonna be that night.

Joyside DVD release @ Mao:
There are rumors swirling around that there might be a one off performance by Joyside themselves. Even if they don’t play, the bill is still drool-worthy with Candy Monster Rock, Yes No Break Britpop, The Ghost Spardac, Me guan Me and The Bedstars. This one might go on for a while folks so bring some stamina.

Black Cat Bone @ Frank’s Place
Looks like the ‘Bone is ready to swing again with a new drummer. As a warmup to their 2 Kolegas gig next week, they “might” be playing friday night at Frank’s place…

Ephemeral 2 @ Jianghu:
I expect this one to be packed and more fun that Yugong. With Gangzi, Li Daiguo and a few more.
Pretty much everything i wrote above about night 1 can be said for night 2. Note that this one is scheduled to start at 19:30 apparently!!!

Young Guns @ Mao:
On the heavier side of the spectrum, you can look forward to Beijing’s new wave of upcoming bands like Army of Jade Kirin, Multi-Ego etc…. These cats are all fun!

Madness @ 2Kolegas:
this is a Daze-Feast with some of our good friends and better bands playing. The Amazing Insurance Salesmen come out of hiding, they’re joined by Ghost Spadac, Nucleus as well as Wu & The Side Effects. With this kind of lineup, guess where Ruby and I are likely to be hanging that night?

Beijing Alchemists @ Jianghu:
This name has been popping up more and more lately. I have no idea what or who they are but they’re making some noise around the capital city and it is inevitable that our paths cross. Has anyone actually seen them play yet? color me curious.

SO folks, a bunch of things happening to keep everyone busy, especially me.
If you’re on the Shuangjing side, don’t forget to stop by Mako Livehouse. Away from the noise and media, these guys are still putting on shows left and right. This weekend will see some heavy hitters like Jacky Danny, Pirates and more play.