There was a lot of hype leading up to Saturday’s Black Rabbit Festival, big international acts were being billed alongside our local favourites in what was promised to be an international style festival. With a few bands on the bill I was dying to see, there was no way I was going to miss this one, especially when the day dawned blue, clear and the perfect temperature to sit in the sun. I have a good friend working for Splitworks, so I was lucky enough to get in free, but I would have paid the ticket price without hesitating. I got there early to see Shanghai’s Rainbow Danger Club, a band I’ve been waiting to see up in Beijing for a while now. And they didn’t disappoint, even though playing to a very small crowd on the Oblivion stage. Unfortunately for me I got so sucked in by their music I didn’t make it over to the OPPOsite stage for Omnipotent Youth Society, missing them for the third time now. 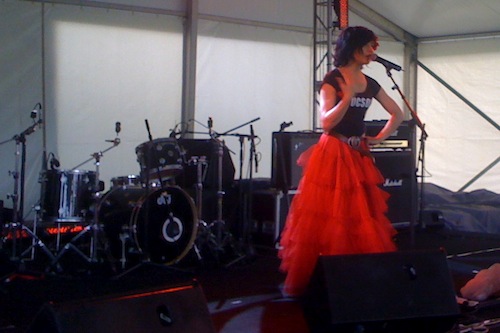 The three stages were situated quite a distance away from each other, making it very hard to get between them, especially when some over zealous security kids were blocking off the short cuts at various times during the day. This was made more frustrating for a lot of festival goers by the last minute line up changes and the lack of a correct schedule, either on the iphone app or in the programmes being given out, which meant people were missing acts they wanted to see. I had to break the bad news to some annoyed Titus Andronicus fans that they weren’t even in the country, let alone playing.

For a Minor Reflection

I found myself spending most of the day at the smaller Oblivion stage, where For a Minor Reflection stole the show for me with an amazing set and sold a lot of CDs to their new fans afterwards. I was looking forward to seeing Marianne Diassard, but was disappointed to see her singing over a CD – seriously we have so many amazing musicians in this city, how hard would it have been to put a band together for her?! I really hope she can get something sorted before her D22 show next week. Wang Wen were awesome, as I had expected they would be, though possibly a little showgazer in their performance style for me. But by that stage it was nice is chill out on the grass and listen, not having to stand as there wasn’t much happening up there to see.

There was a small food area outside the main stage are selling hot dogs, burgers, pizza etc and cocktails. I’m told there was also chuanr and beer being sold somewhere, but I didn’t see it. The food was ok, nothing special, but a few Chinese friends weren’t happy with the selection, wanting more local food.

Over on the OPPOsite stage Hanggai did what they do best and entertained the mainly local crowd earlier in the day. But the time Yellowcard came on the laowai numbers had increased and I was surprised to see international school kids crowdsurfing during their set – are they even old enough to know who Yellowcard is? By the time headliners Ludacris and 30STM came on the crowd was overwhelming laowai. I gave both a couple of songs and then moved on, there’s only so many “yo, yo, ho’s” a girl can take. 30STM have a great drummer, but his brother up front just looked tired and bored, and was having trouble connecting with the crowd. Even their super fan G was not impressed by their set.

I only made it over to the NBA Street Jam stage at the end of the night for Grandmaster Flash. The guy has got to be pushing 60 now, but he had the crowd dancing and singing by playing all the old school tracks we love, from AC/DC to Nirvana and everything in between. As the OPPosite and Street Jam stages finished I walked out slowly listening to 120 Days close the show on the way.

All respect to Splitworks and Taihe for doing what they said they would, pulling of a really great international festival. I’ve been to more than a few this year and I have to say this one had the most laowai I’ve seen by far. I’m sure Wudaokou and Sanlitun must have been empty on Saturday, because by the end of the night I actually felt like I was at an Australian festival! Despite the frustrations with the venue and schedule, they did well and everyone I spoke to seemed to enjoy the day. I’m looking forward to next year!