October holidays are straight ahead folks with tons and i mean TONS of music opportunities in Beijing including festivals and what not…. Basically you gotta really try hard to not find anything interesting. I’ll do an October Holiday Quickslants later to deal with the flurry of shows next week. For now, here’s what the end of the week looks like: 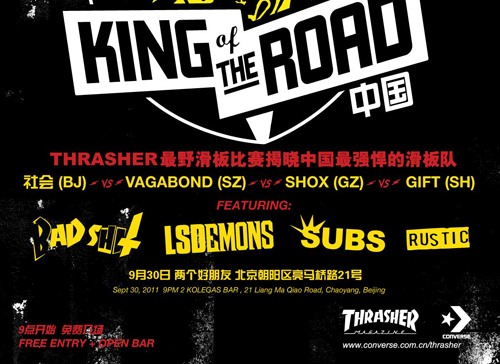 Bone @ Mao Live:
Admittedly, I never heard of these guys before Ruby mentioned they were playing and I’m not sure what they are like. That said, they’re playing along with Residence A whom I have not seen in quite some time and same goes for Me Too. Yang Tiao is one that I’ve been meaning to check out for a while. Should be a good mid-week rocker

The songs repeating on myspace started giving me a headache!

Marianne Dissard @ D22:
I saw her two weeks ago at yugong yishan.. a prelude to her appearance at Black Rabbit festival. I enjoyed her performance despite the lack of a live band. She has tons of personality and I would love to see how she interacts onstage with band members. It’s Rock Chanson, basically smart assed americana that is quite enoyable.. even more if you understand the lyrics. I had the pleasure of chatting with Marianne and she’s a really cool cat.

Trasher Mag Night @ 2Kolegas:
Ok so we have 4 pretty darn good bands: SUBS, RUSTIC, LSDemons and Roadshit… and guess what? The show is FREE and there’s an OPEN BAR.. uh? what’s not to like? People of the world…..I’m asking you! What is not to like? Is there a reason to go anywhere else?

Lao Da & Song Yuzhe @ Jianghu:
Yeah… these two playing together at Jianghu are one of the few reasons I “could” consider skipping 2 Kolegas… probably a better option anyways for those of you that are more on the folk side of things. after what seemed like years dealing with bad health, Lao Da is back in full form and his name popping up in many places nowdays which brings a smile to my face. He’s like Tom Waits, Leonard Cohen and Nick Cave all rolled into one body. Song Yuzhe ain’t bad either by the way… these two are icons of the folk world in China.

NovaHeart @ Yugong Yishan:
I’m not a fan of electro/dj stuff but I am a Helen Feng fan. The lady is multitalented and while I might not appreciate her latest efforts, I’m sure some of the readers would. She’s debuting her new solo effort, NovaHeart friday night at Yugong Yishan and those in the know seem to like it…. so it’s definitely worth a mention!

Kind of a chill night folks… nothing out of the extraordinary happening with some decent heavy music at Mao Live as well as a reggae party at 2 Kolegas.

Old What! Anniversary day 1
Skarving and rolling bowling headline day one of celebrations for the Old What Bar’s 9th year anniversary… damn!!! 9 freaking years already! That almost makes it the granddaddy of live music venues in Beijing considering all the other ones have gotten chai-ed by now. big up big up…

I love Guo’An @ Mao:
Held for the second night in a row at Mao live, this one has all the usual suspect that prowl the streets of gulou at night: The Unsafe, Misandao, Early Bus, Gum Bleed as well as Rolling Bowling. I’d say it’s a usual Mao live party and that’s not always bad. I’m curious to see how GumBleed sounds now. same thing for the Unsafe since they have been playing more lately and the jitters from punk fest must be gone.

Chunqiu @ Gulou 121
Well, almost forgot this little sucker but thanks to Ruby for the reminder. ChunQiu plays a set at Gulou 121 on sunday. I am not sure if it’s acoustic/electric or maybe both but I know the guys at the venue love the band and they try to make their shows special. I just really wish the seating was better. Still, Chunqiu fucking rocks!