Lidong Album Review: Northwest Folk Folk From The Heart of The Ningxia Plains

Migration complete… the bird has landed… I’ve been trying to come up with cool poetic ways to get things started on this Lidong album review to match the band’s music and lyrics but i find myself unable to. I’ve been hearing these songs for the most part of the last 2 years and I’ve seen them performed live countless times under different arrangements. Still, when I got a copy of the master tracks finally, it brought a smile to my face. Let’s see how it came off!! 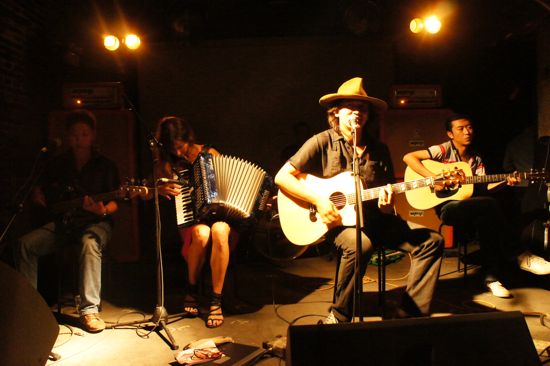 There are 9 tracks on the record, 2 of which are reapeated in an alternative arrangement. We start off with “Future” that boasts a lovely guitar opening and some funky accordion works courstesy of Lidong’s sole foreign member, Marie CLaude. The combination is a bizarre sonic caccophony, almost schyzophrenic. part of the song sounds like the boulevards of Paris, part of it sound like rowdy backyard barn concert.
Xiao Mudan, the next number, is one of those earworms… you have been warned! I love this track live but it’s not really doing it for me on the record as part of it sound too clean. don’t forget to check out the promo video for the song… this one brings out the romantic in me with lyrics like “who can understand my heart”. It’s my favorite track on the album by far.
Hexi is one of those songs where i have mixed feeling.. parts of the song are beautiful while others are agonizing to listen to with a haunting drum beat. The part with chinese flutes is very much what i expect from Yellow River melodies. Your mileage might vary on this one! Yue Liang is a song that shines through with its simplicity… I dig the unplugged version so much more than the other one on the record and I’m thankful the band has included both. Li Xia really shows off his singer/songwriter baggage here. If you like Xiao Mu Dan, you’re gonna like Yetian… the songs are very similar in style and beats, both well written crowd pleasers. The closing number, the instrumental Lidong, is a great little tune with some deceivingly eleaborate guitar playing and composition. I love it. Overall, Lanjunma is probably the only song i don’t care much for.
Big ups to Lidong for getting this thing done finally. It’s a nice first effort that should healp them get some recognition around the folk scene. At times though, it does feel like they tried too hard to get this thing perfect and clean. I would have liked hearing it with an earthier vibe, closer to their live sound.
Here’s looking forward to tomorrow’s party. See you there!

How about Ruby? Here’s what she thinks

About 15 mths ago I took a visiting friend to Mao on a Sunday night to see LiDong play. Since then I’ve been getting regular skype messages from Mexico asking if my friend’s band has released their album yet. Well, Daniel, yes, they finally have!

LiDong’s album is everything you’d expect from them if you’ve ever seen their shows around Beijing over the last 3+ years. Beautiful, north-west folk, soaring vocals and harmonies, acoustic guitars taking the lead, backed up by strong bass lines and hand drums blended some western elements of accordion and cello. From the stripped back acoustic version of ‘YueLiang’ to the more upbeat ‘Future’ it includes all the tempo changes we love from LiDong’s shows. I have to admit, I’ve never been a big fan of the accordion at live shows, it often seems to me to be drowning out the guitars, but on the album the mixing is perfect, it fills out the sound of ‘YuTian’ and ‘YueLiang’ without being overbearing. ‘HeXi’ and ‘WoBuShi’ are probably my favourite tracks so far, but i also love the final instrumental track ‘LiDong’ which has already become my ringtone.

The only thing missing from this album is ‘BaoBei’ – although I’m assured that will be on the next album. Well, they have to keep something up their sleeves to keep us wanting more right? I hope they play it on Saturday though!

Well folks, there you have it! Be there tomorrow for Lidong’s album release at 2 Kolegas.
The party starts early with Lao Da, Hanggai, Buyi, Dong Zi and of course Lidong performing. Entrance is RMB100 including the CD
I expect this to be among the candidates for gig of the year…