Lord of the Xinjiangs: One Yogurt to Rule them all at the Urumqi Representative Office

A little over two years ago, I embarked on a journey to try all the provincial restaurants in Beijing. I’m still going strong but after such a long time, I was overdue for a pilgrimage to place where my infatuation with various Chinese cuisines started: Xinjiang Fanzhuang 新疆饭庄 inside the The Urumqi Representative Office Restaurant 乌鲁木齐驻京办.

Pre-BeijingDaze days, most of my reviews ended up on the Beijinger and i was lucky that the review was still there even though i forgot all about it! What stayed with me however was the memories of great food, the best yogurt I’ve ever had in China as well as the lousiest pushiest staff i had encountered. I was anxious to see how the memories would stack up after having been to Xinjiang a few times and trying some of the better alternatives in Beijing itself.

The plan was set in motion for 8:00 pm on a saturday, giving us enough time to sample the good and order what we needed before the kitchen closed. It wasn’t a problem getting a table for 10 at that time! I had tried calling to reserve earlier but they said they couldn’t do it for that hour. 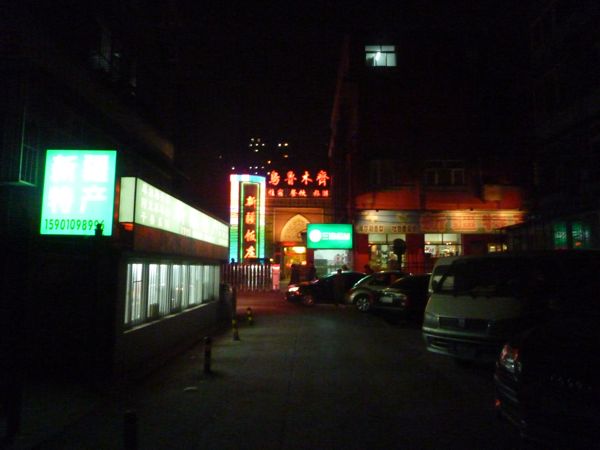 Whereas two years ago we had all sorts of problems finding the place, it turned out to be a breeze this time around. Most people ended up taking the subway and getting off on the line 2 stop of 车公庄chēgōngzhuāng. From there on, it’s a 10mn walk and trust me, much easier than trying to get a taxi driver to go in there. Once you know where it is, it becomes easier than most other provincial restaurants to find.

The building itself is a bit hidden but looks quite nice from the outside in its dark little alley. What I really like about this place is that more than any other provincial restaurant, they try and really bring that real experience in there. There are shops selling all sorts of imported good from Urumqi along with a huge display of fruits, nuts, pastries and what not before you get into the seating area of the restaurant.

The menu is better than i remember, complete with illustrations and English Chinese descriptions making it very expat friendly! It had the usual suspects as far as lamb dishes go with a few surprises. It also featured quite a few beef dishes compared to the other two provincial restaurants. As with most provincial restaurants, you also have a few pages offering random expensive abalone dishes and the sort.

We decided to run the gamut and order all the dishes we could think of so that we had a comparison basis: Chuanr, dapanji, yangpai, etc…. unfortunately, we did get there late so the Zhuanfan (xinjiang rice) was sold out and so were the baozi. Shame as I had fond memories of said baozi from that previous visit.

The Chuanr were of the “big” variety, juicy and perfectly cooked but didn’t measure up to those at the main Xinjiang restaurant. I also didn’t like the giant piece of fat in the middle. The dapanji was solid and beyond criticism albeit using different spices. The noodles, chao mian pianr and la tiao zi were pretty darn solid drawing accolades from some of the more discriminating noodle eaters around. Having a vegetarian in our midst, we took the opportunity to try out some vegetable dishes for a change including cabbage, eggplant and mushrooms that also rated favorably.

When all was said and done, the star of the night was inevitably the Yogurt. It drew unanimous wow and amazing comments from the 10 persons in attendance and i couldn’t agree more. I have no idea why but this baby is just as good as it gets!

The food is good, there is no doubt and you can do a lot worse than eating here. That said, I was surprised at the speed at which the standard dishes were delivered. we’re talking 5 mn or less!!! The one that took some time was the la tiao zi as we asked for a vegetarian version so I’m tempted to think they had a lot of pre-cooked stuff. As of now, I would put this one as a distant 3rd in the ranking of Xinjiang Representative Office Restaurant, behind the Kashgar and the Main one.

A huge pleasant surprise was how friendly the staff was compared to a few years back. They smiled, made suggestions and were on the ball for just about every request we had. That’s a remarkable improvement.

I still think I’m more likely to travel further to the Kashgar Respresentative office but that doesn’t mean you shouldn’t give it a shot and make up your own mind, even if it’s just to see the stalls and markets at the entrance of the restaurant.

Did I mention the Yogurt was amazing?

My Original review from 2008 on the Beijinger:
http://www.thebeijinger.com/reviews/2008/10/04/solid-offer-but-hidden-lands