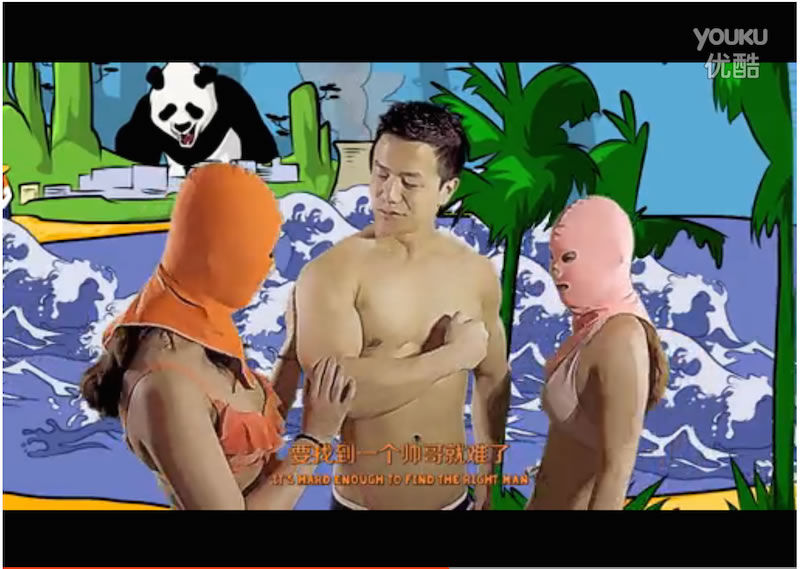 As people that do enjoy their suntan and sunshine, we’ve consistently been shocked and disturbed by some scenes in China that include umbrellas in summer and the much debated, hated, parodied facekini. Heck, it’s got its own wikipedia entry now:
http://en.wikipedia.org/wiki/Facekini

Shanghai expat outfit, Round Eye, decided to take matters into the studio and have some extra fun with it by releasing the song Suntan and a matching video.

From the band themselves:

Suntan is the official Shanghai summer jam of 2014!

A rockin’ track from Round Eye, the self-proclaimed “sexiest, hairiest and loudest band in China,” that also serves as a public health warning for Asian women.

But the biggest contribution to the video comes from actress Wang Lin, famously known for her character Xue Yi (Aunt Snow) from the Chinese soap opera “Romance in the Rain” (情深深雨蒙蒙).

Wang Lin and Avan Zhen begin the video with a heartbreaking tale of trust, deception, suntans and the unbreakable bond between a mother and a daughter. Then it’s straight into the, well, you’ll see…

And on youkuIt’s all fun and games folks… but this one is more fun than others! now, as far as hairiest band… we might have to discuss that one boys.