This past saturday December 19th 2009, the streets of Beijing witnessed a folly that left many a local scratching their head: some hundred odd people donning Santa outfits roaming around the streets and bars smiling, dancing, singing and drinking: Santacon Beijing ’09. I tried keeping a rolling blog of the event but a dead battery got in the way that day. Here is the whole story:

Festivities on the East side of town started at noon in Shuanjing’s “The Brick”, a newly opened bar in the are. A dozen people or so turned up for this first step and got ready with coffee, hot cocoa w/ peppermint shnapps and some pub grub. Big props to the Brick for welcoming the Santa crew. At 1:00 p.m. The Other Red Army started their march towards Tiananmen by subway. There were two exchanges to deal with during that journey: first at Guomao from Line 10 to Line 1 and then Jiangguomen from line 1 to line 2. During the commute, Santas tried their best to spread the cheers and give fellow subway riders something to smile about by singing christmas carols, waving and shouting out ho-ho-hos.

around 1:45, the east side santas arrived at Tiananmen hoping to meet up with the west side crew. We learned that they were still up in wudaokou and were less than thrilled. The square was cold and we were not looking forward to just waiting around until the “Lazy” Santas got their act together. That said we picked up a few more members of the red army there and still walked around taking pictures with strangers. At some point, the local authorities jumped in wondering what the hell we were all about and what we were doing there. A brief little explanation was in order and they left us alone after that but we were never out of their sight. 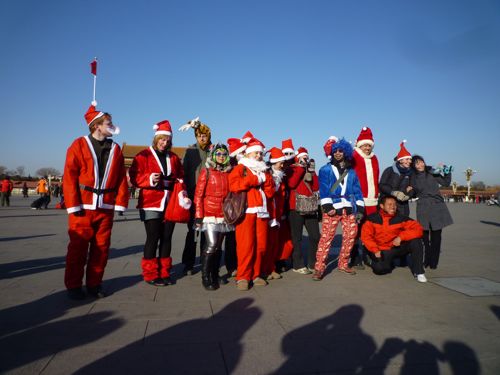 We started experiencing what Guns n Roses would refer to as a failure to communicate with our west-based counterpart at that point and decided to look for shelter and refreshments. after a brief walk through the Hutongs, Rudolph decided to stop at the Qianmen Hostel where we caught up on tweets, calls, beers and coffee. Finally, word was passed around that various people in red garbs were seen roaming around the square. We were still unable to contact them but we decided to check it out and give the meetup one last time before heading to GuLou. there was no chemine ... front door was the only option

and convergence there was! Glorious convergence with dozens of mini-groups all heading towards the flab pole directly across the Chairman’s portrait. finally, they showed up! peace is restored!!!

It’s really difficult to describe what it felt like being there in the middle of a history-laden square seeing more and more Santas arrive and being surrounded by a mob of amused, happy and afraid locals all in one. At some point, it felt like that scene in Lord of the Rings where the Orcs surrounded the Fellowship of the Ring at the doors of Mordor. In this case, more worrisome than the mob of tourists wanting pictures was the 3 vans of security slowly driving around the area. I can only imagine the commotion going through their CV radios wondering WTF was happening and when/if to intervene.

Finally, the word was given and The Other Red Army started scattering away towards the next stop which was the Drum and Bell Bar in Gulou. Getting enough reindeers to handle all of us from Tian An Men proved to be a slight challenge but nevertheless, everyone made it. 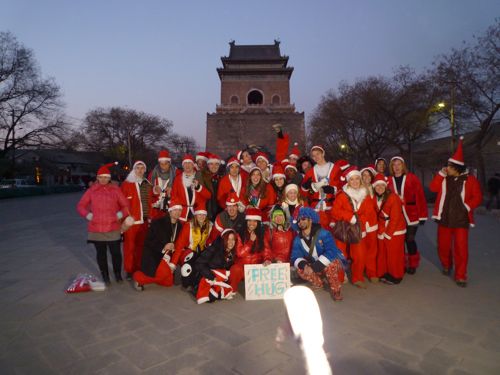 The rest of The Other Red Army’s perils through town went more or less as scripted with copious amounts of refreshments, food, debauchery and camaraderie with pit stops at Salud in Nan Luo Guxiang, Paddy of Shea’s in Dongzhimen, FUBAR in Gongti and ended at White Rabbit in Sanlitun. that's a lot of notches on the hat Santa 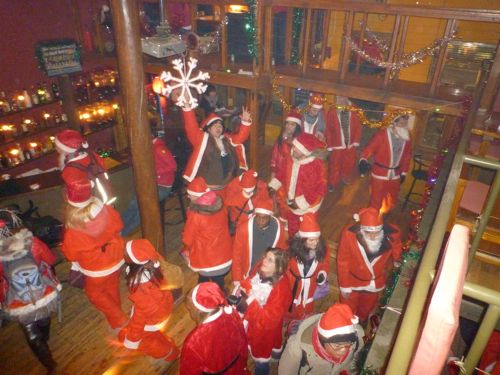 there's a distinct lack of elves

Big props to the organizers for going through all the trouble to make this event happen despite all the potential trouble and difficulties. Also big props to Beijing Boyce for keeping the general public informed of The Other Red Army’s whereabouts. Last but not least, big props to Salud, Paddy O Shea’s, FUBAR and White Rabbit for the discounts and hospitality.

It was my first SantaCon ever and hopefully not my last one!