My first encounter with Voodoo Kungfu dates back to my legendary first “3 gigs in one evening” adventure back in 2009. It seems like an eternity away but the memories of it all are still vivid! I’ve seen them since a few times in a row and have always come out impressed with the show Li Nan put on. He’s intense, prolific, hypnotic and generally one hell of a beast on stage.

Their CD release party at Tango was facing stiff competition with quality gigs all over town, especially a Hanggai @ 2 Kolegas that is always fun. Still, it was a no-brainer! I wanted to see them firsthand, in their chosen battleground before then go on to headline at MIDI.

There was no opening act or whatsoever, just Voodoo Kungfu, which shows the band’s confidence in their fans and themselves. First big surprise was how sober the place was! It was a huge departure from the Mao Gig where they turned the place into a slaughterhouse. Second big surprise was that they kept things simple with just the band and no guest artists of folk orchestra this time around. Sure, we still had all the traditional instrument sound but they came out of a laptop somewhere as opposed to being played live. I think out of the 4 times i’ve seen them before, this was the only time they played with only 4 persons on stage.
One thing must be said though… no matter how many people are on stage, Li Nan stands out! that is one hell of a ripped motherfucker and not in a bodybuilder kinda way but a mean lean muscle machine type.

The new songs are a bit of a departure from the old ones: Dark tones, screeching, throat singing, screaming and high energy are all still there but it’s definitely more Metal and less folksy! Maybe missing his old partner in crime, Narenmanda, has allowed Li Nan to get in touch more with standard Metal including his fascination with Slayer (they did a cover of Reign in Blood) 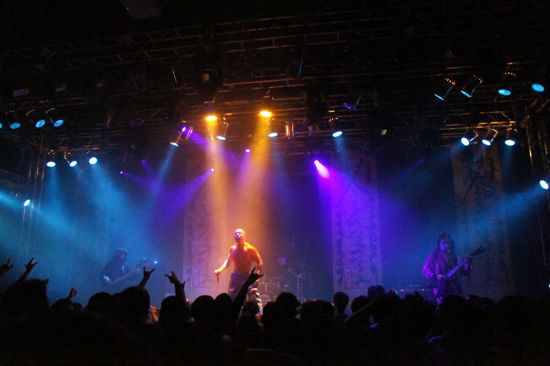 There was a decent response from the crowd and a constant mosh pit going that intensified every time they moved on to playing a classic with 此岸 and 只有神能评判我 drawing huge huge reactions! With 只有神能评判我, the whole of tango was screaming/shouting in unison to what is one of the most radical songs i know off that is sung in Chinese. The 300+ people in Tango seemed to agree!!! 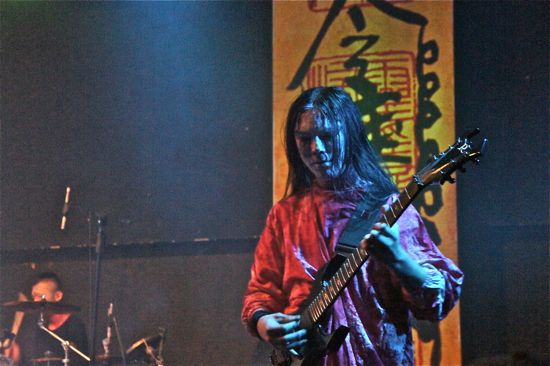 Still, despite it being a great show, I couldn’t help but feel something was missing:
– It wasn’t loud and in your face like I expected it. heck, I didn’t even reach for my earplugs because the volume was comfortable.
– I definitely expected more of an atmosphere that just 4 guys on stage with a big calligraphy.
– Nicco’s bass was barely audible at times which sucks because I love his bass playing in Voodoo Kungfu. He’s a pounder.

The show was fun and I would do it over again. I wonder how MIDI will be if they don’t have the whole orchestra with them… there’s a void to get used to. I’m gonna have to see what happened to the remaining band members! I wish them good luck and extend my congratulations for their headlining status at MIDI.