Chinese Indie Music Lore goes something like this: Folks from Maybe Mars saw Low Wormwood perform live, they immediately started the Maybe Wood spin off label to sign them up and record their 2009 album, We Can’t Help Kissing Each Other. I’ll have to ask them about this at some point. Anyways, with the band playing Beijing this saturday at Mako Livehouse, I thought it was a great time to delve in and review their latest album: Lanzhou Lanzhou The opening and title track, Lanzhou Lanzhou 兰州 兰州, for this record and the video that went along had me really excited from the get go! There’s something about this new trend of having a bluesy folk sound that makes songs appealing and earthy. 那只船 (That Boat) has a lovely flamenco after taste without really being a flamenco song with some interesting ad-libs in the middle parts.. it’s sure to be a popular one live. The other winner on the record is 一个和一万个 (one and 10 thousands)! It’s dreamy, subtle, rich and in-your-face all at the same time! It could be from anywhere in China but really sounds like Gansu would if it were a song with hints of Mongolian and even bouddhist melodies.
The rest of the album is solid but without being as special as the above-mentioned songs! It almost sounds like the guys spend too much time listening to old John Denver records and watching HBO’s deadwood… At the end of the day, it’s a fine effort that sounds and feels honest! At times, i hear shadows and ghosts of that other earthy band, Omnipotent Youth Society or even a little bit of Lao Liu (Sand)… both good inspirations i guess. Singer Liu Kun does have the type of suave timber voice that drives the ladies mad…
Think about it like a you would a dish of Lanzhou beed noodles. You can get them in many places… Low Wormwood happens to serve up one hell of a special version. and I like it… 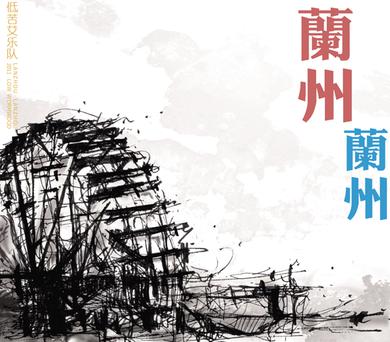 It’s no secret I’m a huge fan of folk rock, especially that from the North-West of China. I haven’t yet had the pleasure of seeing Low Wormwood live, but I have their previous two albums and love them.
兰洲兰洲 (Lanzhou Lanzhou) comes 2 years after their last release and is a tribute to their hometown in Gansu province, a place I spent 24 hours in earlier this year on the DUDE tour. (I think we all ate our weight in noodles that day!) This album is unmistakably from the North-West, you can hear it in all the songs. If you’ve heard LiDong or Buyi before, you’ll know what I mean. It just gives you a feeling of being world away from Beijing, standing in open grasslands, under blue skies, and greeted by welcoming smiles. For me it’s escape music, when I listen to it I just want to jump on that overnight train and head west.
The new album is a lot less experimental than their previous albums, although they still switch up the style and tempo of the songs. From the anthemic title track 兰洲兰洲 (Lanzhou Lanzhou) to stripped back folk of 小草草, the almost ska-feel on 那只船 (The Boat) to beautiful ballad 清晨日暮 (Early Morning Sunset). It’s hard to pick favourites on this album, but I definitely find myself listening to the second half of the album more than the beginning, especially 不叫鸟 (Mute Bird), 一个和一万个 (One and One Thousand) and 红与黑 (Red and Black).
There’s a real honesty and humility that comes through in Liu Kun’s voice, which just draws you into the songs. I remember reading a review of their last album tour that mentioned the same feeling coming across live and that makes me more excited to see them. I only wish it was in a smaller more intimate venue, like Jianghu for example, although I’m sure they have enough fans to more than fill Mako. I’m hoping they’ll mix up the set and play some of their older songs as well as the new album.

You can listen to 兰州兰州 as well as their earlier albums on their douban, including a great live cover/tribute to the Doors!
Catch Low Wormwood Saturday night, November 12th 2011, at MAKO livehouse