There’s a lingering feeling that most of us are suffering from post-festival apathy.. too much music, too little time and tons of other obligations. Still, no rest for the wicked and things are moving on for the weekend. Let’s see what’s kicking, shortslants style 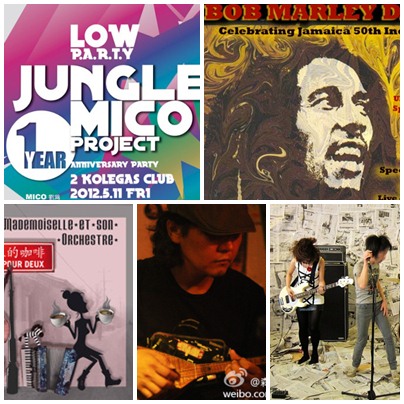 The Stanleys, another Your Town Touring band, hits Mao live with help from 16mn, Perpetual motion Machine and Summer Sunshine. It’s an interesting little combo of power pop punk that might work out as a good transition for the weekend.

Flau Night at 2 Kolegas: This Japanese experimental label has been earning rave praise day in day out with their artists. It could be an interesting evening. Flau’s owner, aus (Yasuhiko Fukuzono) will perform, together with two other Flau artists, Cokiyu and Cuushe. It shhould be good but then again, remember, I have no understanding of electronic experimental stuff.

Jungle Mico celebrates their one year anniversary at 2 Kolegas. They’ve steadily built up one hell of a reputation in Beijing combining instruments and beats for some interesting sounds. They have impressed a lot of people and i want to be next!

Juratt & Mamer come to Zajia Labs for a little up-close acoustic session. They used to hold these as a background to folks sipping on a single malt at Amilal. Zajia is intimate enough for them to pull off something interesting and magical. Expect more melodies and folk than industrial rock.

Hot Cat is putting on a Bob Marley tribute night with an interesting motley crew of bands: Twinkle Star, Liu Yusi, Bedstars and more… This might be a good alternative to the other Bob Marley tribute taking place at Yugong Yishan.

Former Tang Dynasty axeman, Zhang Ju, will be celebrated at Mao Live with a tribute gig that will see some old school heavy rockers come out and play. Interstingly enough, his former band is not listed and a lot of people i’ve asked have not heard a crackle about this gig. Knowing the local PR skills, they probably don’t think they need to advertise it.. right? if you play, they will come.

The Beijing Beatles, Mademoiselle and Rolling Bowlling descend onto the drive-in for a night of fun, drinking and dancing like you only get in that side of town. It’s a party where you’re expected to take off your shoes and hit the grass chilling. It’s also the return of Marie Claude to Beijing after a long long 2 week tour of Vietnam. We’ve missed her! The Beatles no longer need introduction in Beijing: They know how to bring on the good times. It’s gonna be a party at 2 Kolegas

Ember Swift, our favorite Rock Mama, come out saturday to play at her favorite spot in town: Jiangjinjiu. Yeah, it’s still there and it’s still rocking. so should be Ember and her band.

If you’re in the mood for something quieter, head over to Zajia again for a little session with Bye bye and Thank You for the Fish. The SUBS’ side project is coming along nicely and i love hearing their soft delicate side. It’s funny how shy they get ahead of these gigs, fully playing the part.

As always, mileage might vary so feel free to check out other venues for some extra gigs… we’re never short of music in Beijing!