Cute, Talented and She ain’t no animal in a Zoo: Ember Swift Arrives

BD has been talking up one Ms Swift for the last couple of weeks since seeing her at The Bookworm recently (writeup here) . So with him taking a night off on Saturday, I thought I would head into the hutongs with the girls to see the new addition to the list of ‘Daze Crushes.

I wasn’t the only one with this idea, we got in a little late after swinging past Mao on the way, to find the little band room at Jiangjinjiu bursting at the seams! I bumped into many old friends, workmates and a few of Beijing’s music royalty making up the crowd. 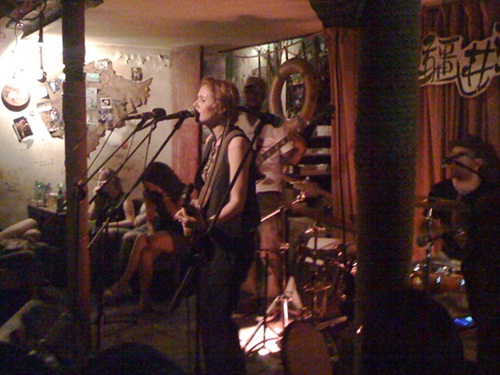 For those who don’t know Ember’s history she’s a Canuck by nationality, but speaks Putonghua like a local. She switches between both speaking and singing in English and Chinese with such ease, sometimes you forget you’re listening to a laowai.

Well, that is until she cracked out the song of the night “Wo bu shi Laowai”. The whole crowd got into this one, even those who don’t speak much Chinese got the meaning and joined in on the chorus. My favorite line: “Wo bu shi dongwu, wo bu zhu zai dongwuyuan!” (I’m not an animal, I don’t live in a zoo!) I’m sure we can all relate to that sometimes!

I have to say I’m a fan of Ember already, this girl’s got real rock chick style, an awesome voice and she knows what to do with that guitar! Her crazy jokes kept the crowd and her band laughing the whole way through the awesome set.

I love Jiangjinjiu for the cozy folk gigs, but for a rock show like this you need a bit of space to move and have a dance! I’m keen to check her out in a bigger venue, somewhere like 2 Kolegas would be just perfect for her high energy set.

To quote Ember herself (from her facebook the day after the gig): “This is the summer of my true arrival. Here. I am.”